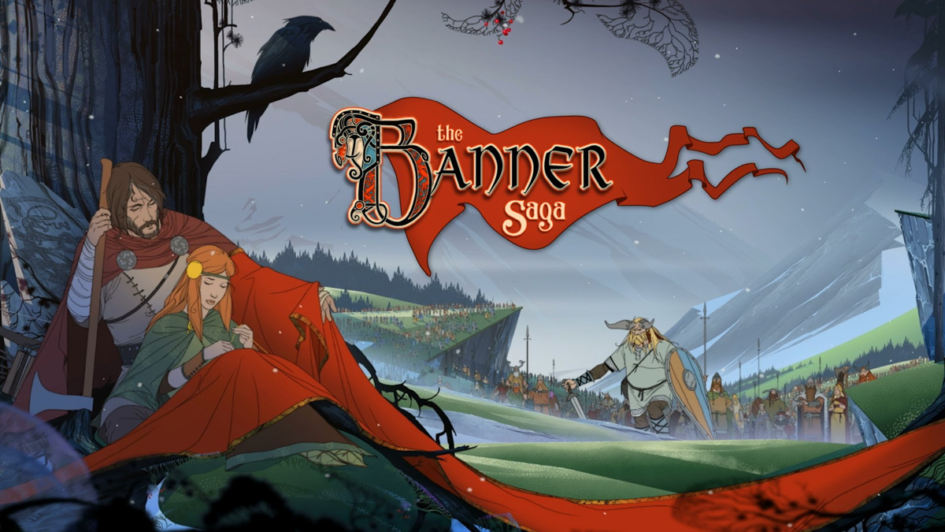 It’s a strange game, a mix of strategy, tactics and storytelling that I wish more games would employ. The storytelling in combination with the graphics brings on a certain sense of melancholy. I don’t want to say doom, because the doom is never that apparent, it just lurks in the background like an evil shadow.

The introduction sets the tone. An older man is speaking with an Icelandic accent. He talks about what has happened, what the gathering of people I see move across the screen are doing there. His voice is so heavy, so tired. A weariness that comes from years and years of fighting. I get the sense of the heroes just putting one foot ahead of the other, and that is somehow going to have to be enough. The people and Varl of the story are tired and broken by too much warfare. It’s the thousand yard stare caught in the introduction of a game.

I played The Banner Saga very carefully. I’m one of those completionist types and I like to know what choices I have and how that will affect the game. And The Banner Saga is all about choices. They pop up when I least expect it. Food is scarce. Rest is something barely afforded. Renown is precious, because it lets me level up my troops, but it is also a source of food and equipment. All in all, it’s a complex system hidden behind a fairly simple interface. But it doesn’t have to be more than this, this is just enough.

The interface is simple and clear. It suits the game well, and whatever information I need to make my next move is presented to me on screen. The game is also very gentle in introducing new features. It’s not fancy, but it does what it’s supposed to do, something that many games are forgetting these days. The Banner Saga would most likely do very well as a tablet based game. I’m hoping for a release to iOS soon, because the pacing and the storytelling is perfect for playing while commuting to and from work.

The strategy and tactics enter the game on the battlefield. There are several characters around to do my bidding, and if I’m lucky and manage to keep them alive, I can put together a group that is well rounded and exchange any injured fighters before going into battle. All of them excel at one thing or another, and it is important for me to put them together carefully. It’s also practical and useful from a game mechanical point of view. Using the characters allows me to level them up. Not using them leaves them behind. And leveling up also requires renown, my precious commodity, gained from killing things and making careful, deliberate choices.

On the battlefield I need to be aware of placement, both of my troops and of my enemies. I can recognize some of their tactics by the way they look and what weapons they carry, but often I am left guessing. My most precious fighters are not necessarily the strongest. It may be the ones dealing damage from a distance, or the ones rallying my weary troops to perform feats of willpower. All in all it reminds me slightly of Archon, that old chess like game for the Amiga. A bunch of different board games also come to mind, because it is more like a board game than a computer game in battle. It’s turn based, so I can take my time making my moves, but it is no less stressful than any other game. More so, considering that I sometimes become trapped with a character I really need, having to find out the hard way if I’ll have the opportunity to use his or her special power before the injuries are too great.

I could talk endlessly about mechanics and strategy, what to buy in market places, when to rest and train, but those are not the most important parts of The Banner Saga. The most important parts of this game are the choices. The choices pervades the game through and through. It’s pure and it’s meaningful, and the choices are what makes me sit for minutes, carefully going over my options, trying to figure out what my next move should be, how to finish this saga my own way. I am intrigued and impressed by this display of complexity and simplicity coming together in one perfect package. I am angry that I am not allowed to save the game where I want to, and at the same time charmed by the game’s unforgiving attitude. Without it, the choices I make would have no meaning. And that is what this is all about. Meaningful choices.

Stoic has done something amazing. I am incredibly impressed. I will play it again, probably more than once.

Five Banners out of five possible.