What it means to be someone 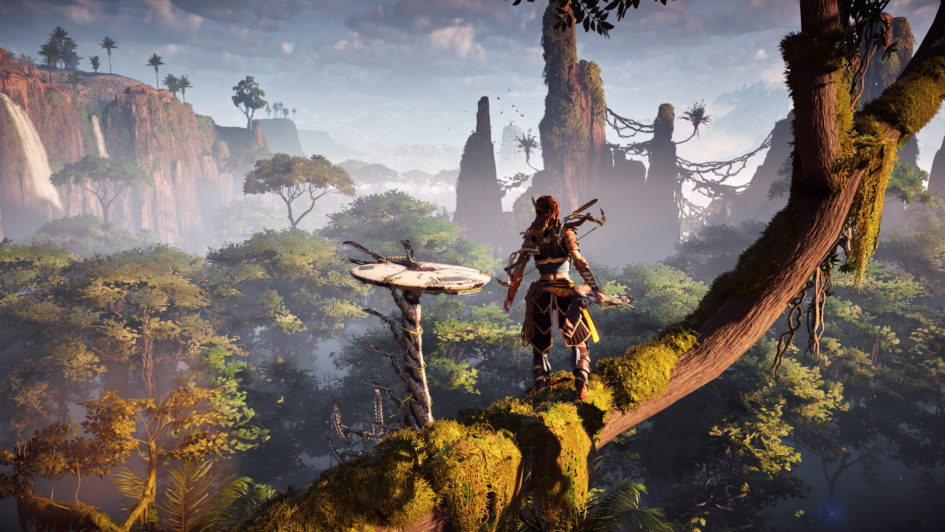 I’ve been playing Horizon Zero Dawn quite a bit this weekend. In fact, I played it so much I got a migraine, because I forgot to eat and to drink and to do anything, really, apart from playing that damned game.

Now I know issues have been raised with the vocabulary used in the game, specifically the terms Brave, Savage, Primal and Tribe. There’s also been some pushback on that criticism. Honestly, I don’t know where I stand because I’m white and privileged and from an entirely different part of the world, which means I don’t really understand the issues as well as I should. I will try to remedy that.

I know that the heroine is embarrassingly white and there’s the trope about the white savior coming along and rescuing all the brown people, and I’m sure there will be more issues popping up as we go along.

The story isn’t amazing, but on the other hand, no game story has ever been amazing.

The most enjoyable parts for me are the snarky comments that Aloy drop now and then. This is one of the first, when talking to a Carja priest, in the service of the Sun-King. I was pleasantly surprised by the tone of voice. And I was also pleasantly surprised to find that this is not the only place in the game where Aloy questions the patriarchy of Carja.

Aloy: Has there ever been a Sun-Queen?
Irid: Many wives and consorts, of course. Or — you mean for the Sun to choose a Queen..? This has not happened.
Aloy: Why not?
Irid: The Sun is masculine, of course, and so would choose his heirs thus.
Aloy: It’s a light in the sky. Never seen anything dangling from it. I don’t know if you’ve noticed, but women run things around here.
Irid: Well — Avad took a woman as Captain of his Vanguard, the first to hold such an honor!
Aloy: You mean Erend’s sister, Ersa? From what he told me, she sounds formidable.
Irid: Formidable indeed. A woman, and an outsider, as well.
Aloy: Might make a fine Sun-Queen, given a chance.
Irid: A Sun Q – ah! – no, no, no.

Maybe this seems like a very small thing, but to me, this is huge. This is giving me a voice, in a way. A voice I’ve not really had before. Sure, I’ve had Shepard, Hawke, the Inquisitor, but those are all made to be both men and women. Aloy is the only player character in Horizon Zero Dawn. Considering what a battle it is to get past the prejudice about women leads Aloy is a breath of fresh air.

“She’s a female lead character,” he said. “That has always been the vision by the team, but we had a discussion. Is it risky to do a female character?”

In fact, once development was underway, so many questions were asked about the protagonist internally, that the company brought in a marketing team to do some focus testing.

“The concern came after the game was in development,” he said. “We started to show it to many more people internally and they had questions about it. So we worked with our marketing groups to do this focus testing.

I wont be buying it for this exact reason, I am NOT a feminist or sexist but a man that enjoys playing as a male character. I don’t enjoy running around in tight cloths with my braids and long hair.
– Quote from comments section in Gamerant article

The majority of gamers do not want affirmative action in video games. These are fictional characters and the people who make them should be able to make what they want without having to check in with the diversity police to see if they broke any social justice bylaws.
– Quote from comments section in Wccftech article

So basically “shut the fuck up, because it’s not my problem so you shouldn’t have a problem with it either”, and belonging and identification be damned. Whatever you do, don’t read the comments on some of those articles. They’re horrid, and they serve to establish the status quo with men as the “dominant species” within gaming. Unfortunately, we’re seeing a backlash that’s only getting bigger. It started August 2014, and it’s still gaining momentum. But never mind, that’s an issue for a later post. Back to the topic on hand.

To be honest, one part of why Horizon feels so freeing is because there is no male protagonist option. This is intended to be a game with a female protagonist. This is not a game where women are an afterthought or gets second place. Yes, she’s white as a sheet, but she’s a woman. And the protagonist was always intended to be a woman. And that blows my mind. Because she’s not wearing shorts and a tank top. Because she’s not using her hair as a weapon and posing in a sexualized manner time and again. Because she’s not sharing animations with a male character model. I don’t know if you know how much representation means. It means a lot. I hope there will be more Aloys with a wide variety of skin colors, with a wide variety of backgrounds. I want the field of games to be as wide for women as it is for men, and I want it to be even more diverse. Actually I want the field of games to widen for men as well.

In any case. I can’t wait to continue playing Aloy and seeing what other snarkiness she can come up with in the face of the Carja patriarchy. I’ve already heard snarky comments from women in the city of Meridian, so we’ll see where it takes me. Right now, Aloy is my path towards women’s liberation in games.

One step at a time.

I will write more on the subject as soon as I’ve managed to extricate myself mentally from the wonderful world of HZD.