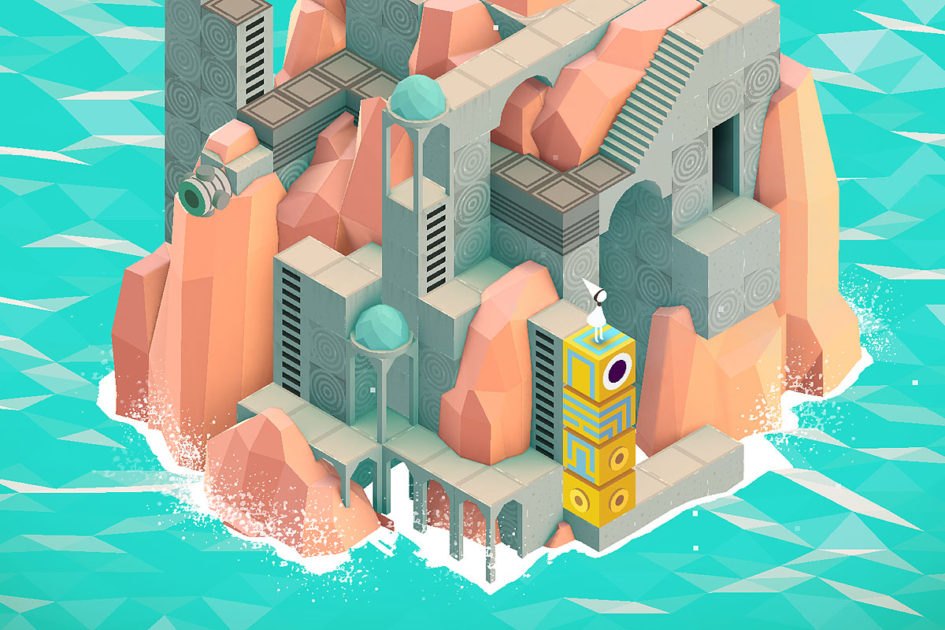 To begin with, I wasn’t even going to play Monument Valley. Someone compared it to The Room, and I’m not overly fond of that game. However, when a colleague of mine was playing it on her iPhone, I heard the music, and was intrigued. It sounded really nice.

There is something deeply restful about Monument Valley, and I think the sound design does its part in creating that feeling. It’s an Escher-inspired puzzle game with moving parts. The “point” is simply to get from one end of the level to the other, and there are a couple of mechanics available to the player to do so. All of it is elegantly packaged in easy to understand graphical indicators, such as a valve to change direction of certain parts, circles to point out that something is movable, and pressure pads that Ida, the heroine of the story, and her faithful totem friend can stand on. All in all beautifully packaged, intuitive and easy to understand.

Monument Valley is a very slow paced game, it doesn’t rush you, it doesn’t demand anything from you. The music made me think of buddhist temples, and the movement of the puzzle pieces of the game enhances the audio experience. It should really be listened to, as much as looked at.

The graphical design is perfect for both iPad and iPhone. I’ve played it on both. The screen size is usually what prevents me from playing on my iPhone and preferring my iPad Mini, but this game has really made the most of all screen sizes. It’s just as easy to play on the iPhone as on the iPad. The lines are simple and the graphics very light, both in line weight and color palette, again very reminiscent of an Escher painting. The graphic design and expression plays well into the light and relaxed feeling of the game, and it goes hand in hand with the music.

The storyline is simple and not essential but it does bring a bit of flavor to the game. Ida, the heroine, is seeking forgiveness and redemption through her journey to restore the sacred geometry that has been stolen from the temples. On her way, she meets ghosts and the most adorable crows I’ve ever seen. They remind me of some of Dave McKeans artworks, although much, much cleaner in their expression.

Another one of my colleagues compared the game to Journey, but I think both the mood and the feeling evoked by Monument Valley is much different from Journey. Journey is about discovery and has a more profound exploration feeling to it, a melancholy I think Monument Valley doesn’t share. Monument Valley is more of a celebration, a restoration of things the way they used to be.

The puzzles are impressive. Very impressive. Ever since Zoë Mode’s PSP game Crush, I’ve sort of been waiting for something similar. I am truly amazed at the complexity and ingenuity of the levels in the game. It’s brilliant level design and graphic design rolled into one.

If anything, the storyline presented in the game was the only thing that detracted from the experience. In part because it made me question who the ghosts were, which was never really answered, but it also broke the mood. For me, it was also a very short game. It took about an hour to play, and the levels were relatively simple. Not exactly challenging, but then that’s not really why I played it.

Despite that it is definitely worth buying, and it belongs to the type of games that I list in the category “I wish I’d done that”.