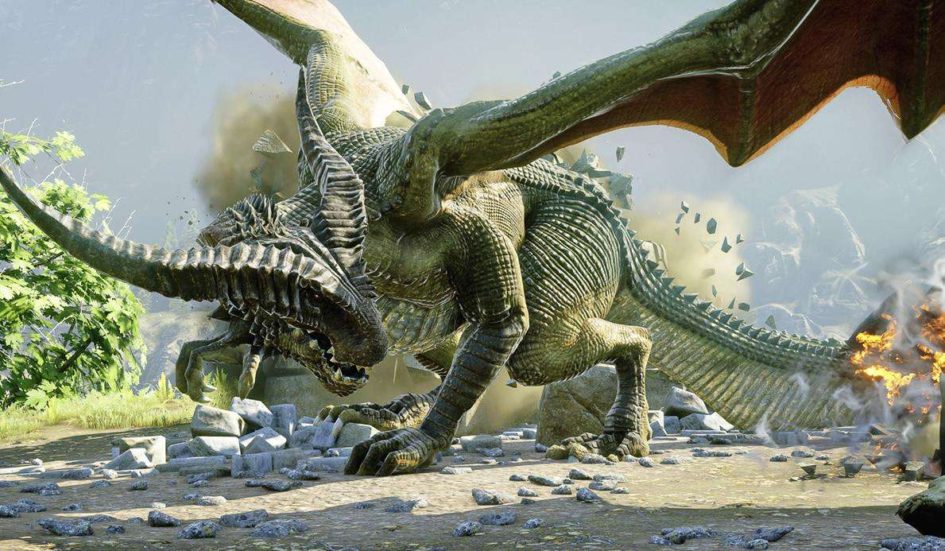 Before you start reading this, I should mention that this post contains spoilers for Dragon Age Inquisition, in particular regarding the creatures that dwell in the world.

If you’re okay with that, by all means continue. What I’m going to talk about in this post is how game mechanics carry messages, and that these messages affect how at least I play a game.

As you may or may not know, I spend a lot of time in Bioware’s games. Lately I’ve spent a lot of time completing Dragon Age Inquisition. I already know that I’ve not managed to catch all the
quests and things that you can do in the game, but I’ve done a lot. In the 108 hours I played, I also managed to slay dragons and giants.

Now the dragons and giants are a bit special. They have separate health bars on separate parts of their bodies. They also react when a certain amount of health has been whittled away from a specific body part. There are smaller animals that have the same system, but the effects are not as noticeable in them.

This is what happened to me.

I entered the Western Approach where there was a dragon researcher asking me to find out more about dragons, which I did. Completing the quest, however, leads to me being asked to bait the dragon and (presumably) kill it, because the dragon won’t just hang around and eat the innards I’ve stuffed the traps with.

Iron Bull is of course excited by the prospect of killing a dragon. Dorian thinks I’m insane and Varric takes it in stride.

I, however, balk when I realise that this dragon hurts when I attack it.

I managed to focus on the right front leg of the dragon for a while, and it started limping. That simple mechanic transformed a dragon hunt (MUCHO XP) into something I wasn’t quite expecting, something that was a complete turn around for me. All of a sudden, I didn’t want to kill the dragon anymore. It didn’t really matter that it was breathing fire on me, it was limping, it was an animal and I had hurt that animal. At that point, my want for completing the game and for the influence and XP that the dragon hunt would lead to was almost overtaken by my sympathy for this beautiful animal. It did not help that I had a cat sleeping in my lap while playing.

So what happened? Why did everything change? How did I go from hunter to empath? It was obviously the behavior of the dragon. If the dragon had been acting as the rest of the enemies in the game, at one stage alive and aggressive and then then next dead and loot, I don’t think I would have reacted.

But the dragon, just as the giant, have behaviors that display damage. It makes them more relatable and more vulnerable. It is fairly simple to get that response from me. Just make the
damned thing limp and I’m all “oh poor dragon! What have I done!” It took me a long time to work up the nerve to attack another dragon. The sleeping dragons that appear in some parts of the game didn’t make it any easier. They were curled up like cats (note, cat in lap while playing) and they were snoring (also note, my cats snore). A sleeping dragon offered multiple sneak and crit opportunities for my rogues. Flanking, poison, all of those things were there for me to take advantage of. Instead I snuck by the sleeping giant lizards and hoped they wouldn’t wake up. They kept snoring, and it was only at the end of the game that I could bring myself to do them any harm. At that point I had psyched myself up, telling myself “they’re pixels, Åsa. They won’t feel it.” I also ran the cat out of my lap. She curled up next to me instead, with a very hurt expression on her face. I had to give her a treat to feel better. I’m a sucker for my cats. And as it turns out, dragons.

It was still very difficult to kill the dragons. Not because of the fact that dragons are a bit tricky to kill (lots of HP) but also because I really hated hurting them. I respecced my
mage to be a healer while letting Varric, Iron Bull and Cassandra take on the beast. I couldn’t touch it. I hung back boosting my team with barriers and healing mist, running around making sure that my AoE regeneration potions were healing the warriors and Varric as we fought. Well. They fought, I just stood by and let them kill these majestic creatures.

I have to admit, I wasn’t expecting that reaction from myself based on something so simple as separate health bars, and a behavior based on the health level in those bars. I wonder what would happen if this mechanic was implemented on “normal” enemies as well. It might be impractical from a GUI perspective, but in a game about diplomacy that kind of mechanic might help make it more difficult to kill enemies. In any game where violence is not just a means to an end (XP), I think behaviors of hurt animals and human beings might provoke reactions from players that are not just focused on the kill, but also on the effects of that kill. I’m not saying that games should make you feel bad, but I think I would appreciate games that reward me as a player for other things than killing. For me as a completionist in Dragon Age Inquisition, I really don’t have any alternatives to killing the dragon, at least not if I want the associated quest completed and the trophy. But what if I could? What if I could talk the dragon down? Or lure it to a different hunting ground? Create a dragon roost in my keep? Another set of mechanics to create a deeper and more satisfying game.

Despite all this, I’m really impressed by the Dragon Age team’s decisions regarding the dragons. It gave me a wake up call, a close to visceral reaction and a “what the hell am I doing” moment.

More than one such moment.

Strangely enough I wasn’t that affected by killing giants. Perhaps because giants with their humanoid shape imply some sort of intelligence and free will. A creature attacking me out of free will is different to a creature just wanting to survive. My reasoning is this – the dragon attacked me because I was invading a territory staked out by the dragon. It was operating on instinct. The giants in turn, attacked because they wanted to, just like the other enemies in the game. That does not make it easier seeing a giant fall to their knees and start swiping around them to find the gnats that hurt them, but it does make it easier to kill them. They attacked me, I defended myself.

Somehow that reasoning doesn’t work on the dragons, in particular not on sleeping dragons.