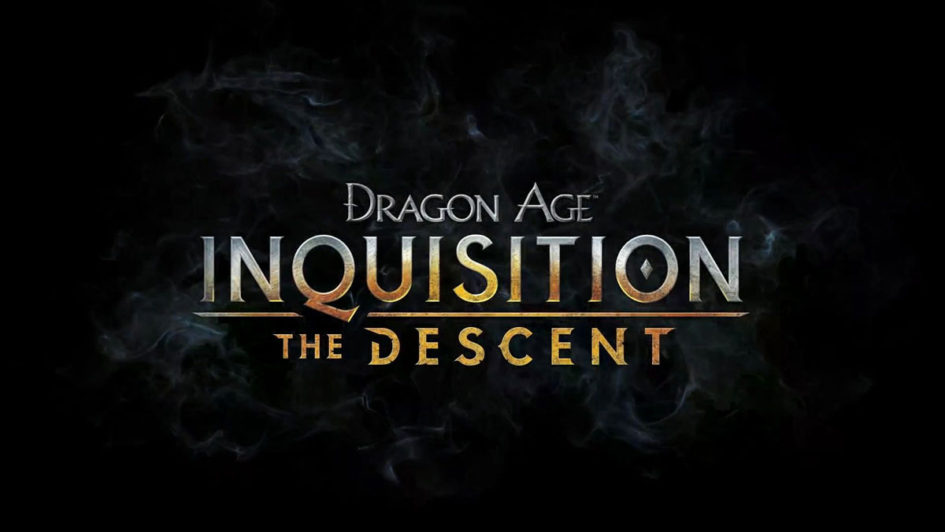 The Descent is about as dramatic as it sounds. A deep delving adventure into the belly of Thedas, with the intent of making sure that the lyrium mines are secured. This review might include a few spoilers, and it WILL include more than a little speculation about the nature of lyrium, so if you don’t want to get spoilt, my suggestion is that you don’t read this text until you’ve played the DLC.

I was pleasantly surprised at the end of my vacation in August, when all of a sudden there was a new DLC announced for Dragon Age Inquisition. It probably wasn’t as sudden as Jaws of Hakkon, but honestly, I’ve been less than diligent in following the updates from my fav game studio lately. Anyway, The Descent crashed into my XboxOne on August 12:th or 13:th (it was released on the 11:th, I think) and I started playing it with a level 27-ish Mage that I had been working on for a while. I had already played the Hakkon DLC with this character, so she’s pretty high level.

The reason I’m saying this is because I think that you, if you want to get more out of the DLC than additional adventuring and stunning areas, you should probably play it a bit before the end game. I had no issues slugging my way through the multitude of monsters on display, and I definitely did not get any experience for it. That was the sad part about The Descent. Oh, and the abysmal lack of additional romance. In Dragon Age II DLCs, relationships are at least acknowledged, but in both DLCs for Inquisition, the romance has been sadly lacking, unless you count the romance between NPCs. Take a leaf from the previous DLCs you yourselves have made, BioWare! There’s that fun moment when Anders complains bitterly that he doesn’t want to go down into the Deep Roads to Varric in Legacy, and Varric says something like “you’re doing it ‘cos you think Hawke is cute” and Anders admits, that yes, that’s exactly why he’s there. Or in Mass Effect’s Leviathan where there’s a tense moment when Kaidan asks Shepard not to do this, not to risk her life going down into the unknown deep. Not to mention Citadel where you even get to make out with your love interest of choice. Anyway. That’s besides the point. The point is – no romance makes for a less vibrant gaming experience.

The DLC is introduced the same way as any new area in the game. All of a sudden there’s a locked opportunity on the war board. You pay power to open it and voilá! You get a new area to explore. In this instance you also get some extra banter with scout Harding about the nature of dwarves. And then you start going down. It’s a long way down. The first camp you establish in the Deep Roads is more like a stronghold in that it has all the fixings you’re going to need when venturing down into the unknown, such as a smithy and a potions station. You won’t find much in the way of herbs or plants down in the underground, so make sure you have enough elfroot and whatever else you’ll need for your favorite potions to tide you over. You can always exit the mines, but where’s the fun in that? “Oh, sorry, I need to get out of here for a while. I ran out of blood lotus.”

With you on your journey into the deep you have Renn and Valta. Valta is from the Shaperate, a recorder of memories who – for a reason that you’ll get to discover on your own – was more or less exiled from Orzammar. Renn is her assigned body guard, a gruff Legionnaire of the Dead, with more than a little fighting experience. Renn and Valta bicker quite a bit, and Renn actually makes me wish for a male dwarven love interest. Ehum.

While delving down underneath Thedas to stop the tremors that threaten to disrupt the lyrium trade, and in the long run perhaps threaten Thedas itself, I predictably run into darkspawn and stuff to collect. The darkspawn are predictable, in particular if you’ve played all three of the Dragon Age games, but it’s kind of fun to meet the guys again. Ogres and hurlocks and emissaries are just begging to be soundly trounced, and trounce them I do. For the completionist there are gears and things here, placed in really inaccessible locations, making use of the completely unreliable jumping mechanism that was also used when hunting shards in the Hinterlands. I can’t say I enjoy scanning for gears, but the rewards are okay if you take the trouble to locate all of them.

The world is – as usual – completely stunning. You’d think that after three games located more or less in the Deep Roads, the Deep Roads would stop being fascinating, but no. There is a beauty here that will take your breath away, if you stand still long enough to let it. Vertigo is easily induced in the deadly drops and the tight ledges you have to negotiate to get where you need to go. And there’s new music, the same kind of goose bump inducing music as The Lost Temple. Melancholy and bitter sweet. It suits the Deep Roads well. It is after all a kingdom lost.

The most exciting part about The Descent is however the secrets revealed when delving down into the earth. This is where the spoilers start for real, by the way.

In Dragon Age, the properties of lyrium are discussed, but lyrium is not given as much space as it may deserve, based on the things that can be found in Dragon Age II and in Inquisition. It’s the combination of the lore in DA II and Inquisition that makes lyrium both mysterious and kind of shiver worthy.

In Dragon Age II while in the Deep Roads with the expedition, the Champion of Kirkwall and her retinue run in to the rock wraiths, or the Profane as they’re also called. The wraiths gives us the first clues that something about lyrium might not be as straight forward as we may think.

We who are forgotten, remember,
We clawed at rock until our fingers bled,
We cried out for justice, but were unheard.
Our children wept in hunger,
And so we feasted upon the gods.
Here we wait, in aeons of silence.
We few, we profane.

“And so we feasted upon the gods”. The wraiths eat lyrium. Early on in Inquisition, we’re also clued in on the fact that lyrium can hold the darkspawn taint. Lyrium is alive. What is actually found at the bottom of The Descent DLC is not a surprise for me at this point. Lyrium is alive, it sings. If you take too much, you go crazy. My guess is that lyrium is the blood of the gods, and the gods are Thedas in a very literal sense. I’m just interested in seeing how they’ll connect this to Mythal and Fen’Harel and all the other elven gods that were trapped by the Dread Wolf in their respective realms. Perhaps the godhood as described at the end of Inquisition is the spirit of the beings trapped in the earth? Gaia in a very literal sense.

In at least two of BioWare’s games now, there has been the need, not to look to the heavens for answers, but to delve deep into the depths to find the truths of the world. Leviathan required a deep sea dive, The Descent takes you far beneath the surface of Thedas. There is some symbolism here. The heavens are corrupt in Dragon Age, by our own greed. And in Mass Effect, the heavens hide gods that would destroy us if we let them. Someone should write a book about this.

The only sorrow I have is the fact that the game developers felt the need to add the same old, same old boss fight at the end of the journey. The discovery was enough. What if they’d have spent that time on some grand revelation, cut scene style instead? Or more romance?

All in all, The Descent brings new content to Dragon Age Inquisition and definitely some new and interesting lore, but I miss the relationship building that used to be a part of BioWare’s DLCs. Where’s the love? I can also say that it is depressing to not be rewarded for slaying enemies by the ton anymore. I’d have wanted enemies that could help me level up, if nothing else so that I could progress my character. But it is stunning and revelatory, and it is more time with my beloved companions, and I can not fault it for that.

The Descent gets 3 legionnaires of 5 possible.