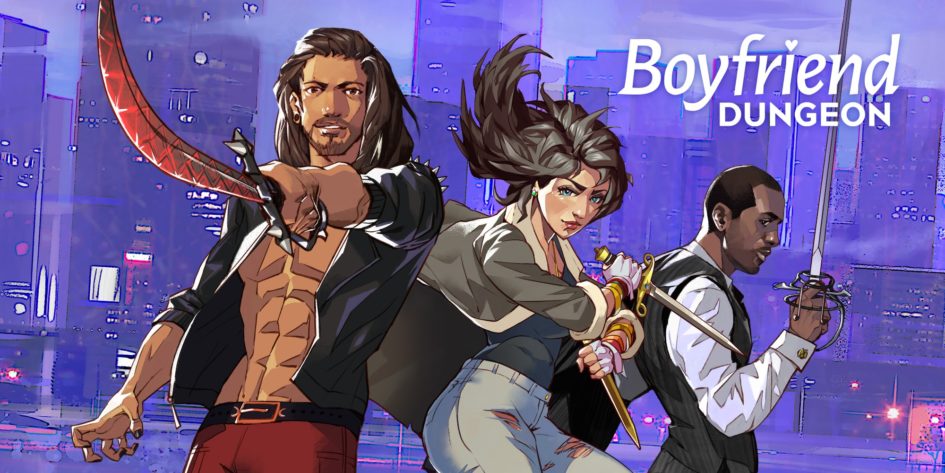 From my perspective – and bear in mind that I am a white, cis, somewhat queer asexual person – Boyfriend Dungeon is a friendly, whimsical, and very respectful game, taking place in Verona Beach. Yes, I think the Shakespeare references are intentional.

As I progress through the dungeon levels, the snappy mobile phone monsters, flying VCR cassettes and phonogram record players are all out to get me. As I progress I also pick up weapons, and by leveling up myself and going on dates with my weapons, I also level the weapons up. It’s a good progression lock, because it makes it less likely that I get too powerful without experiencing the story. I do have some concerns around the pacing, though, but since the game isn’t very difficult to play, those are pretty insignificant.

My first encounter is Isaac, a debonair business man with a flair for philanthropy, wine, and chocolates.

Sunder is a secretive man with an exhibitionist soul. He definitely puts all of himself on display, except the part that counts. Sunder is a sabre and cuts a wide swath in the battlefield. Sunder is also very fond of dancing and quite persistent. While I do enjoy wreaking havoc on various strobe lights, loudspeakers and martini glasses with him, Sunder isn’t really my jam.

Valeria is one of the quickest of the weapons, which makes sense since she’s a dagger. She also kind of proves to me that while I may be asexual, I’m probably not as straight asI think I am, which is weird to discover at 47. Yes, reader, the battle between polyamorous Valeria and monogamous Isaac over my affections was an epic one. One that Valeria apparently won.

Seven is a K-pop start struck with a certain level of ennui. He turned out to be one of the most sympathetic weapons of the lot. As a lightsaber he’s also one of the most powerful weapons in the game with a well timed AoE to control the battlefield.

Seven turned out to be the person I felt the most kinship with, and he’s also the weapon that suited me best.

Rowan is a somewhat mystical scythe that I didn’t find in my first playthrough. Rowan was difficult to get to know, and a bit too mystical for me.

The scythe turned out to be quite powerful though, but still not as powerful as Seven. Rowan is not quite my speed. I don’t understand them at all, and I keep saying the wrong thing.

Sawyer is a bit flaky and a glaive. While Sawyer is a bit too young for me to romance, they’re a nice person, but quite immature. As a weapon, Sawyer is powerful but slow. They do make up for it by controlling the battlefield.

Pockets is a cat and quite catty. It’s hard to get an understanding for Pockets, but if you let the cat to come to you, I’ve found that works pretty well.

In general I would say that despite the somewhat grindy combat, the variation in the weapons make it less boring than it might bae been otherwise.

From my perspective Boyfriend Dungeon does a lot of things right. The game is respectful, varied and inclusive. Despite the quite harsh criticism Kitfox Games received due to the underlying theme of stalking in the game, I can’t say that I felt the content warnings were insufficient, but my experience with stalking is limited. I have had my share of awful relationships, with a ton of psychological abuse though. I don’t know. Maybe it’s correct to call it out, but I don’t think Kitfox Games have been intentionally harmful.

I’ve really enjoyed playing Boyfriend Dungeon so much so that I’ve bought it on several platforms and played it three times so far. The only things I’m missing with the game are more dungeons. This would have been nice from a grinding perspective. I would also have appreciated being able to smooch Jonah, who honestly came across as the pst interesting potential date in the game. But then I’ve lays had a weakness for large, cuddly, men.

Yes, Boyfriend Dungeon does cover topics that may be traumatic for individuals who have been stalked. No, for me, it doesn’t detract from the pleasure of playing the game, but that’s MY experience.

I have a feeling that this will be one of my comfort games moving forward.