I want a refund

I thought I’d take a leaf from this guy’s book and ask for a refund. But for a different reason. Thanks to @tauriqmoosa for the tweet and the image. 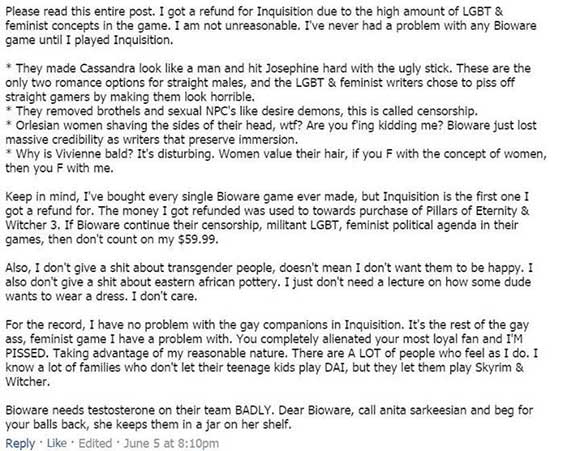 Keep in mind I’ve bought over 800 games (that I know of!) and ever since I started playing I’ve been bombarded with sexism, but I’ve never gotten any money for being exposed to a toxic culture. I’ve spent a ton of money on this hobby, but I’ve never gotten paid for it (Well. I work with game development, but no one paid me to play. Unless it’s our games. Umm..). In fact, I’ve spent countless hours modifying content to be able to feel at home in the game worlds I’ve visited.

Also, I care about how trans* people are treated in games. I think it’s disturbing how they, if they exist in game, often is the butt of a transphobic or homophobic jokes or how they’re used for comic relief. I do care.

For the record, I have no problem with heterosexual companions or other characters in games, it’s the fact that there are no other sexualities represented I have a problem with. Gaming culture has tried to oust me for as long as I’ve been playing (over 25 years) but you don’t see me giving up the fight. I believe gaming can be a better place for everyone.

The gaming culture and industry needs diversity badly. I’ll personally make sure that game companies like BioWare gets my money, because they’re fighting the good fight. In the meantime I want a refund for 25 years of sexism, racism, homophobia and trans phobia. I think I’ve earned it. In fact, I’m feeling entitled.