The Why of it All 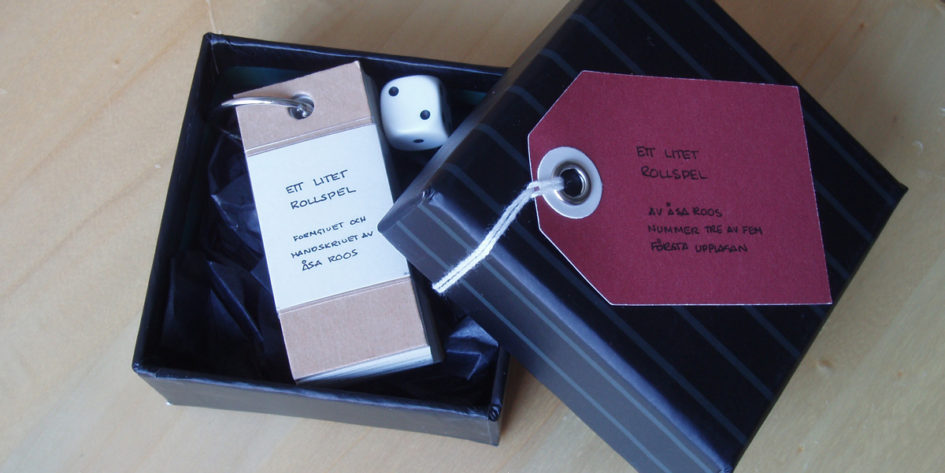 I held a presentation at work, not too long ago, about pen and paper design, and why I do the things I do when not at work. It was a bit improvised, and mostly, it was about the keyring RPG that I wrote a few years back, the publishing of which coincided with the death of my father. What I did talk about, to all my co-workers within the design craft at Avalanche, was the joy I feel while making analogue games. I’ve made several games, few of which are completely done or even ready for beta testing. What I talked about that day was not based on any methodology or any specific teachings that I wanted to convey. It was based on pure love.

However, I could not possibly hold any kind of talk without providing some guidance. I talked about how I work with design, the methods I use and finally some takeaways from a 25 minute long presentation that dragged on a bit. I talked about how – on the surface – the keyring RPG is a simple thing. It’s an RPG that fits on a keyring notepad, so basically it was all about making rules that worked in a small format. But that’s hardly the truth. The truth was that I spent about a year trying to figure out another idea that I had, which had nothing to do with small notebooks or keyrings. It had everything to do with postcards, though. Because as much as it may shame me to admit it, I spent about a year working on an idea that was basically dead in the water. I thought that putting a game on a bunch of post cards and mailing them back and forth would make a great game. In retrospect, the idea was rather bad, because if you buy a game, what do you want to do with it? You want to play it. If you need to wait for someone to send you the rules on postcards one by one, that’s sort of counterproductive.

Armed with these thoughts, I spent some time making rules for my postcard game. It was simple mechanics, based on rock, paper, scissors. I did a basic design on index cards, and there were three of them in total. I’ve lost them now, which I mourn a bit, because normally I don’t lose stuff, but I think they might have been hoisted out in a fit of cleaning panic. To be completely honest, the years 2011 – 2013 have been lost to me due to my father’s illness and death, my uncle’s death (he died 10 days after his brother) and my maternal grandmother’s death. I’ve been lost in a depression for quite some time, but I’m resurfacing. This circumstance is important, though. My losses are important for context, because even though I, on occasion, didn’t want to live, I still wanted to make games. That’s how much I love games.

Anyway. Rules on index cards, and barely any playtesting. This idea that I had, this system, all of it fell into place when I found a very small notebook from MUJI. I found it, I bought it, and I wrote the game straight into the notebook, with the help of a 0.4 Pilot G-Tec-C4, a ruled page and a lighttracer I bought specifically for that reason. That’s the way I work. I buy tools for one purpose and then it turns out I could use them for a million more. I wrote it with a disposition made and with the index cards close at hand, and I wrote it from start to finish straight into the notebook. I made 5 copies, each one of them took about 40 hours to write and I blogged about it here on discordia. I sold three of the handwritten RPGs, but as it turned out, there was a bit of a need for the little RPG, so after some convincing, I did a crowdfunding campaign that went really well.

This is basically the presentation I held, the part about the deaths in my family excepted. The takeaways are the following:

There are also some things you should always do when designing for yourself. Or others. Have a goal in mind. What’s the purpose of the game? Why do you want to do it? For me it was to make something portable and cute (but don’t tell anyone about the cute thing, ok?). Use sketches, because sketching is quick and easy and can be thrown away without much agony. Prototype your game. Mistakes are good, and a prototype can be changed quickly and easily. You’ll also have to think through the game from start to finish with a prototype. Boardgames also have a transparency of mechanics that makes it easier to find errors or balancing issues. A prototype also gives you an actual, physical product.

The reason why I’m totally in love with pen and paper, is because 1) I’m not very technical. Well, I am, but I don’t know how to program. 2) It’s tactile. You can feel it. You can touch it. 3) It’s quick and visual. 4) It actually makes you think in a different way than when you sit in front of a computer, just like writing by hand changes the way one writes compared to writing straight into a computer. The tools shape how we do things, and in the end also the quality of the things we do. 5) It’s relaxing to cut and paste with scissors, glue and paper.

In the end, designing makes me happy. It gives me a sense of meaning and a sense of accomplishment. And having others play my games is an amazing experience. So everyone should and can make games. It doesn’t have to be perfect, but it should be joyful.