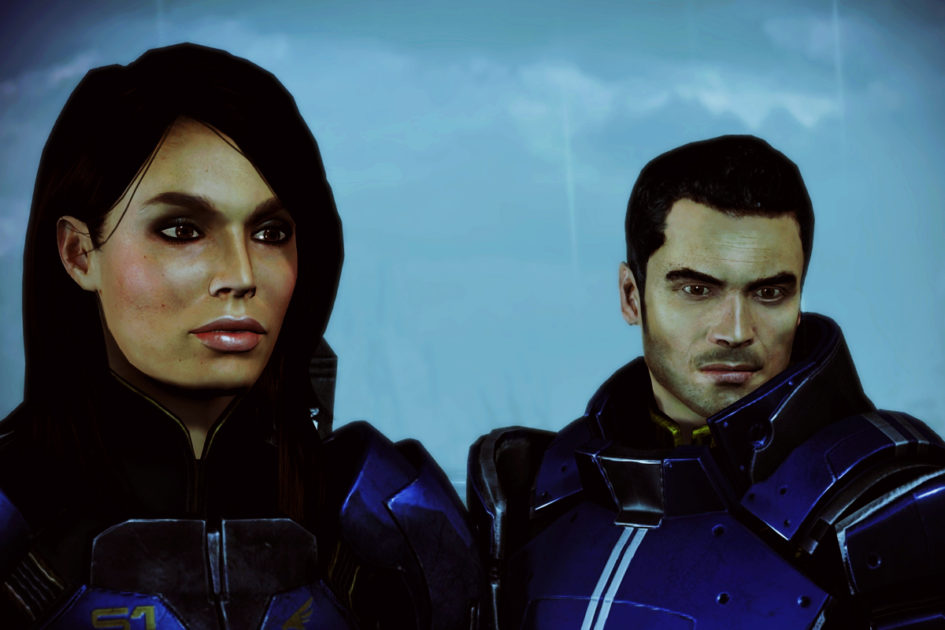 There’s this thing that happen every time I try a new BioWare game. I fall in love. So far I’ve fallen in love with a long string of game characters, not necessarily of a pixel variety. My first game love was Lone Wolf. My Swedish edition of The Caverns of Kalte (Kaltes grottor), is thumbed through multiple times. Because I felt that I could relate to, if not identify with, Lone Wolf. And so, as impressionable as I was, I fell in love. And it was uncomplicated, and it was sweet. Later on, when I started playing RPGs on the computer, I fell in love with Valen Shadowbreath. A much more satisfying relationship, as the tiefling confessed his love to my player character as well. I didn’t know it, but that’s when I became hooked on BioWare games.

So why? Why have a crush on a bunch of pixels and dialogue strings? Part of the explanation is the fact that we, as human beings, are social creatures.

Humans inherently seek to be connected with others and feel that they are interacting in meaningful ways. This need for relatedness naturally occurs in all of us, requiring no external incentive. We are simply evolved to connect and to feel like we belong.

Rigby and Ryan go on to expand on the fact that we all want to feel included and seen. Noticed, I think is a good word. For me, being noticed is actually pretty big. I’m not (objectively) very pretty, so having someone that talks just to me is pretty big. I’ve noticed that sure, it doesn’t really top a real relationship (that would be… strange) but it does let me feel certain of the courtship. Admittedly, the freshness of the relationship rarely last beyond the first playthrough, but it is still dependable. I can retreat into the game, feel loved and kick some ass at the same time. Awesome.

Polygonal love also removes the risk of failure. If anything, I’m the one picking and choosing who to romance in the game I’ve picked up. If there are options, that is. There is no risk, and I don’t have to pretend. My love interest is there, regardless of how I look, smell, what my income is, the color of my skin, my sexual orientation and so on. I know I can succeed in a romantic relationship or for that matter any relationship.

For me, the most important reason to why I keep falling head over heels for pixellated personalities is “I am seen. I matter. I mean something.” Through the game I am acknowledged as a human being. Even though that human being is usually represented by an avatar, I still feel like I exist. Someone hear my words. This is usually included in the premise of a game. If I’m to save the world, someone has to listen to me.

To be honest, that’s actually why Garrus is such a good friend. He never falters. He believes me, regardless, and he supports me in my quest, even though not everyone else does. That’s also one point in this list of “why on Earth would you fall in love with a bunch of pixels an scripts?” The support is important. My companions in for instance Mass Effect have my back. They do not question me, they help me out. They support me, no matter what.* They also validate what I’m feeling. Who doesn’t want to hear that one is beautiful? And these are trustworthy emotions. I’m not suddenly being told that I’m too fat or that I should wear make up.

Another part of this is that I have an impact on the characters on screen. If I do something to make Alistair jealous in Dragon Age Origins, I get a very tangible receipt on that I’ve done something to hurt him. His approval goes down. It’s very gamey, but hey wouldn’t YOU want some way to measure how much someone likes you? I know I would. So much easier with points. But that’s not the only impact I have. Zevran’s heart breaks. Leliana is disappointed. Alistair looks as if I kicked him. Anders hates me. Liara wrings her hands, and Alenko just buttons everything up and stops talking to me. Similarly, I am told when I’ve done something to endear myself to the characters, again it doesn’t really matter that it is just numbers on screen. Morrigan loves her mirror and smiles (SMILES!) at me. Zevran gives me his earring, and from Alistair I receive a rose.

All of these things support the illusion of emotions.

Great single-player experiences with NPCs (such as in Oblivion) succeed with players partly because they provide thoughtful contingent reactions that successfully yield relatedness satisfactions. When the dialogue with an NPC meaningfully changes, when they react with happiness, anger, or sadness based on the player’s individual choices, players feel they have a meaningful impact. In other words, they matter.

My personal belief is that without relating so strongly to the characters in Lone Wolf, Mass Effect, Knights of the Old Republic, Neverwinter Nights and the Dragon Age series, I would not have played as much as I did. Without reactions from my NPCs, I would never have gotten a crush on them in the first place. Relatedness is a very strong need. Sometimes, the easiest way to feel loved, is to turn on the console, and boot up a game.

__________________________________
* There are some very important exceptions to this rule. I can mention two, and I think those of you who have played will understand without spoiling it for others. Horizon in Mass Effect 2 and the Chantry in Dragon Age II. These events did however hold a very significant emotional impact on me as a player, and turned into very strong moments in each game series.