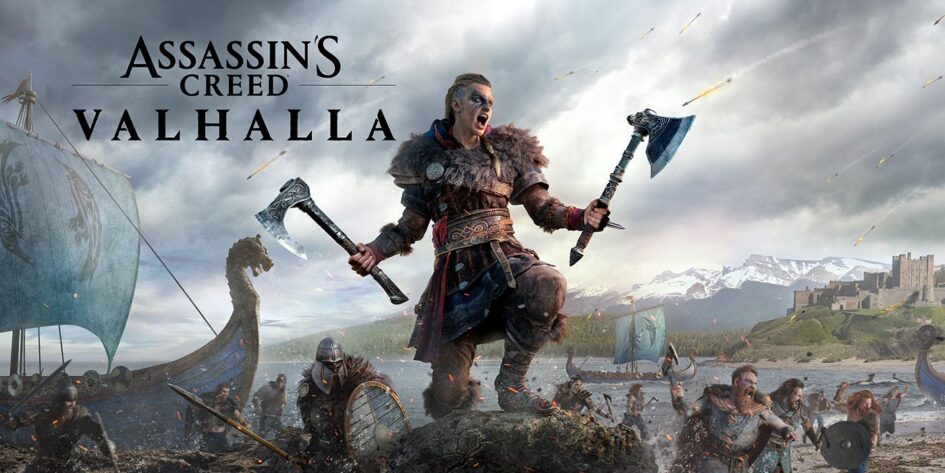 First off, I had a really hard time naming this blog post. What the heck does one name something that is so amorphous as the tone of voice in a game wobbling all over the place? Secondly, a lot of the stuff I talk about in this post is based on feelings and much if it is implied and not stated clearly, but I hope you will be patient and read anyway. Oh, and yes, if you haven’t played the entire game, this post may contain spoilers.

I’m also aware of the infinite irony in this post, because thinking about tone of voice, when the tone of voice sort of belongs to a game and player character that I have chosen to portray as a woman is not lost on me. It’s a common thing to be remarked on when someone doesn’t like how a woman comes across.

Based on all of the above, I will try to tread carefully and in all honesty Eivor is not the one I’m mainly concerned with. It is the game and how it presents certain aspects of itself.

I am a completionist. This means I see most, if not all, content in the games I play. In some cases it is a blessing. In some cases, it’s a curse.

First off – yes I’m aware that the Aesir weren’t exactly paragons of good behaviour, but neither did they care much about gender roles. If you study the myths Thor and Loki were, with a modern word, quite genderfluid and didn’t really care that much about “proving” their masculinity as such. They were gods. They could do as they pleased. Loki disguised himself on numerous occasions as a woman. Contrary to the game, Thokk is actually portrayed as female presenting in the myth around Baldur. He also turned into a mare and seduced a horse, the result is Loki being the mother of Sleipnir, Odin’s eight legged horse. In other words, gender or biological sex is not something the gods really care about all that much.

To be fair, I’m slapping a modern viewpoint on all this and I can’t say that I know that much of Norse mythology apart from what I have read in school and as part of the research for this post, but there is an irreverence towards gender among the Aesir that I feel Ubisoft disregards.

In the Asgard arc, the Master Builder comes to Asgard after the jotun have invaded. The Builder states that he can create a wall so great that no jotun can ever break through. For that he wants Freya as his wife. This is handled between Havi and the Master Builder, no other gods in sight.

I’ll get to the point. The issue I have with Freya and Odin and the Master Builder should come as no surprise. First of all, Freya and the rest of the gods – including Odin – deny the Master Builder his prize, which is to be clear also includes not only Freya as his wife but also the sun and moon.

In AC: Valhalla the player is in other words left alone with the decision if they should allow the Master Builder to marry Freya. Now, the way games work is clearly encouraging me to move in a specific direction. “What if I deny the Master Builder? What happens? Will the story progress? What do I need to do to succeed?” This is the problem with the illusion of choice. We’re given the illusion and the illusion prompts us in one way or the other. To break it down further:

In other words, the game has taught me that I can opt out, but if I opt out, the narrative stalls. It’s one of the more unfortunate aspects of the narrative in Valhalla. If I want to progress I have to go along with what the game wants, meaning that even the illusion of choice is kind of stripped from me in Valhalla.

Either you go along or you won’t get a completed event and the game most certainly is the deciding factor in how an event is completed.

Now put this in the context of the Master Builder. As a player I knew saying no might abort whatever I was doing. As a person my choice was obvious. I had no intention of promising to marry off Freya to another person, because that’s not my decision. It’s Freya’s decision to make.

As a player, my options were limited. I did the only thing I could. I played for time and I felt awful about it.

That’s one of the issues. The other issue is that this decision wasn’t the player’s to make. Even in the myth, Freya has a say. In fact, one of the things that is absolutely certain is that Freya has both the power and the inclination to say “no” to both gods and man. The creators of Valhalla have chosen to focus on the less empowering aspects of the myth. Instead of showing Freya as someone in control, and in choosing to let Loki call Freya a whore, pointing out that she is liberal with her affections, the creators of Valhalla have made a choice. To be fair, Loki calls Freya a whore in myth as well, so I suppose there is support for that. But in myth she has power. Here, I feel she’s more of a plot point. Valhalla has chosen to remove Freya’s autonomy. They have chosen to present Thokk as a man rather than a woman in the Jotun arc and they have chosen to ignore fun stuff like having Thor dress as Freya. Instead it’s Loki casting an illusion, playing into the “feminising the villain” trope. There’s a lot going on here, both on the Loki end and on the Freya end.

Why remove gender fluidity as anything but a joke? Seeing Loki disguised as a woman and then hearing his voice from her? Is that intended as anything but a punchline? Why not let Thokk remain a woman? Because the player could get confused? I doubt it. Thokk isn’t a major player, and I’ve been through both the Asgard and Jotunheim arcs. Loki’s tendency towards deception is also well established, if not in Valhalla, it has been in popular culture at large.

When I’m playing the game, I get a feeling that there are undercurrents of something else happening in AC: Valhalla. Not only are the myths mildly or not so mildly twisted to meet a “binary washed” expectation of the world but I also get the feeling that the creators of Valhalla are subtly thumbing their noses at diversity and inclusion.

Why do I get that feeling? Because just as Eivor is sometimes out of my control (more on that in a later post), so are some of the choices in world events, also known as mysteries, seriously creepy and uncomfortable.

Most of the time the creep factor is mirrored meaning that women are responsible for being the creepy ones with behaviours that are normally seen as “male”. “Take me a Husband” asks Eivor to kidnap a man to bring to a spinster living nearby. The man in question has no idea that the woman wants him for a husband. She lies to Eivor and Eivor believes her without question. Eivor picks up – excuse me, kidnaps – her a husband. A note nearby the woman’s house not only confirms this but also states that she wants the man for sex. There are a bunch of issues with this scenario, not in the least that it would somehow be okay to kidnap a person to make them into a partner. I get the vague feeling that this is a woke joke, and it’s supposed to be funny because look! It’s the woman doing it! Therefore it can’t be bad and you can’t call it out!

There are a few of these in the game where I suspect the joke is on someone and they’re all based on an implicit misogyny that it’s very hard to put a finger on. I would call it microaggressions, if anything. The reason I’m taking these mysteries seriously is because just as I am taught as a player that I might miss out on a storyline if I don’t promise Freya to someone else, I’m also taught that if I want to complete the game I’ll have to be complicit in some fairly unsavoury stuff. I’ll have to abduct a husband. I’ll have to force a woman into marriage to someone she doesn’t love; not just Freya, but also in a Mystery in Hamtunscire, The Arrow in the Tree. I’ll also “help” another woman to trick a man into opening his door with poetry.

In Jotunheim there’s a husband who beats his wife and contrary to almost any other mystery, you have a choice here. You can kill him or let him continue to beat his wife and keep her lover caged.

All of this leaves me with a fairly sour taste in my mouth. It’s okay to let a man continue beating his wife, but it’s not okay to refuse a kidnapping?

I’m sure almost all of these stories except the last one are intended to be fun and lighthearted, at least the ones dealing with lovestruck women. Instead they become nagging itches that make me feel as if I’m supposed to be laughing at something I don’t think is funny or want to be complicit in.

In all their “joking” glory, they undermine women. They point at the subject, laugh and seem to say that this is okay because a woman is doing it, which is of course not true. It implies hypocrisy. It says “look this is fine, no feminist would oppose this, but if it was a MAN“… I’m caught coming and going. Do I want to 100% the game? Become complicit. Do I want to protest? Tough luck. I have no choice unless I want to ditch the mysteries.

Aspects of Valhalla rub me the wrong way in a serious fashion. I think the biggest disappointment in all of this is that this could have been an awesome installation in the Assassin’s Creed series. Instead it feels as if the game is trying to be the same as but still distance itself from its predecessors. The UX of the game – which I’ve written about here – makes it obvious, but the decisions made are not good decisions, they’re awkward and counterintuitive.

In the same way, Valhalla’s narrative is pulling me in two directions. Inclusivity and diversity on the one hand, and implicit catering to the gamerbros on the other.. What are a few jokes at the expense of fat, old, ugly women, after all?

I spent 230 hours playing Valhalla, so I dare you to say I haven’t played the game. I have and despite the sunk cost fallacy, despite a multitude of biases that tell me I should have enjoyed every bit of the game, I didn’t. There are definitely moments of brilliance. The conversation with Basim being one and the meeting with Stowe another but the game never gripped me. I did most of it by rote. I think a lot of that was a push-pull feeling. I was respected as a player one minute and the next I was ignored. The game was considerate and then it made tasteless jokes. I never expect perfection in games. But I do expect some form of direction. Valhalla felt as if it wanted to be both considerate and irreverent at the same time, and that caused massive cognitive dissonance in me.