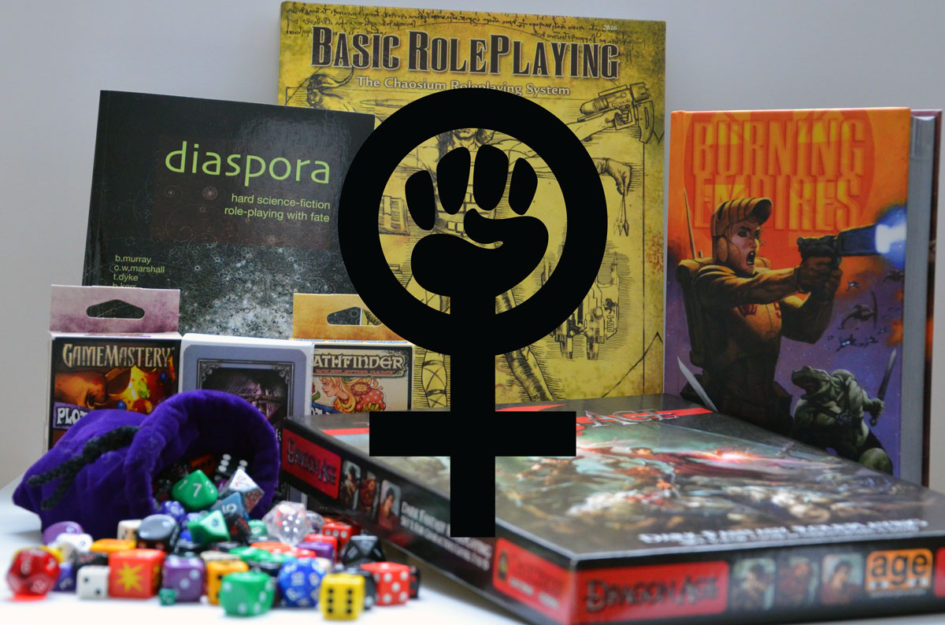 Work It Harder Make It Better
Do It Faster, Makes Us stronger
More Than Ever Hour After
Our Work Is Never Over

There’s this thing. It’s called feminism, and it has to do with the radical notion that women are people. I’m a feminist and I’m working in the games business. I love making games. When I’m not at work making games, I make games at home. I write for games, I review games and I have a huge game collection. I hope this makes me a gamer, although I’m not sure. The rules surrounding women are fuzzy in the gaming culture, be it in a company or outside it.

At the moment there are about 10% women in the Swedish game development business. There are a lot of factors playing into this, but in the end, they’re all related to culture. The culture thing is one big catch 22, since all aspects of our culture, gaming and otherwise, influence each other. A friend of mine, a gender equality expert, talked about the different areas surrounding the treatment of women in male dominated cultures a while ago. We talked about the obvious and why the obvious is not always the solution to a problem, and for me, being one among four women in a project consisting of roughly 80 people is a problem, and not only because of numbers.

Numbers has its own set of issues. Being all alone as a woman in an all male environment brings with it a number of challenges. First of all, there’s the token female situation. Rosabeth Moss-Kanter wrote about this in her article Some Effects of Proportions on Group Life: Skewed Sex Ratios and Responses to Token Women in the American Journal of Sociology.

In it, she outlines the effects of being in an extreme minority in a larger group of people. The first effect has to do with not being seen as an individual representing him- or herself but as a person representing a group. What this means is that if I fail at anything – being a solo woman in a man’s world – I’m representing all women in the same situation. The result is that instead of saying “Åsa is really bad at…” it will reflect on a whole group “women are really bad at…”. I think XKCD said it best.

This situation means that I’m visible at my workplace. I’m different, and I get questioned quite a bit more than my male colleagues – can she or can’t she do the job? She’s not like us, so is she as dedicated as my male colleagues? Another side effect of tokenism is that a minority tends to get isolated, put in roles and kept out of the group. Or as I have frequently experienced – to be let in, but only on the conditions that the majority states.

I’d also like to point out that I have no trouble getting noticed. As a minority, I stand a much bigger chance of being seen, but not for what I accomplish and my competence. I get noticed because of what I am. This is not altogether negative. I’ve been invited to speak on Swedish national radio, I’ve been interviewed for some of Swedens largest newspapers, but invariably not because of my skill but because of what I am. A woman in a male dominated environment.

Looking at Moss-Kanter’s article she describes situations where women either try very hard and promote themselves to get noticed as competent, or try to become invisible as to not stand out in the group. I’ve tried both, and both are relatively successful. Although if I promote myself I get called a bitch, and if I don’t, no one notices the work I actually do, and I get seen as less competent than my colleagues. It’s a difficult situation overall.

The funny thing is that there is a very strong motivation for bringing women into the mix. Companies with as little as 30% women in management perform better than companies with few or no women.

But numbers aren’t everything. Apart from the numbers game there’s a cultural aspect to take into account. When I’ve managed to get a foot into the male dominated space, what am I allowed to do? Basically, who pours the coffee at meeting? Who takes the notes? How creative can I be when I’m participating in discussions? When am I allowed to talk? Does anyone listen when I talk?

It’s not a coincidence that many women who work in games work in administrative roles. I’ve met very few creative – as in working with something deemed creative – women during my 12 years as a game developer, and I doubt that it is a fluke that I’ve landed a job as a producer with no experience in production, but have found it impossible to get a job as a game designer with 10 years of experience. Basically what this means is that there is a culture in the companies that promote women as administrators (mothers for the creative types) and incompetent as developers (because girls don’t know games, don’t play games, can’t make games). My friend, the gender equality expert got this quote from a developer. “Women’s brains are not designed to be programmers. That’s why women cannot work as programmers.” This from a 20 year old male in the business.

As said above, gender equal companies perform better, they are more profitable and the employees are a lot happier and their health is better. But women as a group are picky and more prone to leave a working situation where they are treated badly. I’ve seen first hand how developers egg each other on to create a macho working environment where status is measured by how many hours you put in, not by the quality of work.

So there’s that. But there are also examples of a misogynistic culture among gamers in general, perhaps more so than among developers even though it does appear now and then. Remember the “feminist whore” incident? Not very noteworthy for you perhaps, but as a woman, and a feminist it sends a pretty clear signal. I have no intentions of ever working at Deep Silver, because the message sent is “we don’t like women, and we think gender equality sucks”.

Things like this pop up all over when it comes to the gaming culture. Anita Sarkeesian started a Kickstarter project aiming to take a look at tropes in video games. The torrent of hatred and harassment she had to withstand was incredible. This also sends a pretty clear message. Gamers are all pretty happy with the situation as it is. It’s comfortable, being the main target audience of an entire business.

The issue here is of course that women consist of 34 – 65% of the audience. Yes. 34 – 65% of women play games, but the hard core games are directed mainly towards men between 13 and 26 years of age. A broader scope of games would probably attract a broader audience, and not just additional women, but additional men as well. As long as the preconception in the gaming culture states that gamers are white heterosexual males between the ages of 13 and 26 and all games are made for male heterosexual gamers between the ages of 13 and 26 we won’t see changes happening. And as long as the audience stays the same, the developers will stay the same (a crop of young white (presumably heterosexual) males), and the games won’t change.

Games are awesome. I love games. It would be fantastic to see how far we can reach, how wonderful a gaming experience could become – if we just let go of our preconceptions about what games are, who makes games and who plays them. Viva la revolucion!