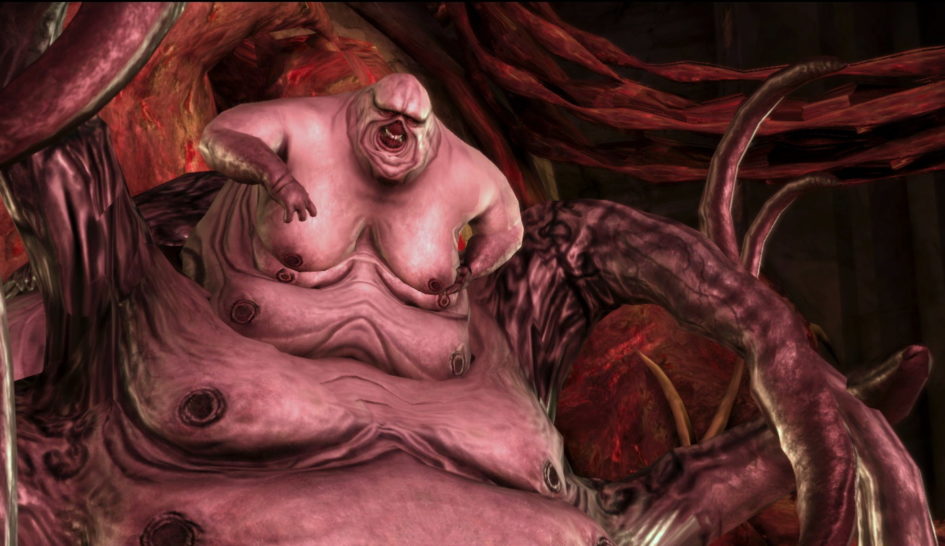 I’ve already spoken quite a bit about this aspect of games and the underlying implications of being unclean and inviting the monster into yourself in the post about Banshees and Broodmothers earlier.

You can – and I will – argue that the Western idea of monster hood is by inviting the monster in, in some way. If we allow ourselves to become permeable, or if we consume the monster, we become the monster. And it’s our fault. There’s a moral aspect to monster hood.

[…]The […] monstrosity in and of itself is often conveyed as evidence of one’s moral and/ or individual failings.
Playing With the Past, The Historical Conception of Biohazard, Robert Meija, Ryuta Komaki

This is clear both when it comes to the Asari Banshee and the Darkspawn Broodmother. A Banshee is ultimately the result of two Asari parents1, something that is taboo and recognized as taboo in the Mass Effect universe. A child of Asari parents is called pureblood. Purebloods are sometimes Ardat-Yakshi, demons of the night wind, a genetic aberration who feeds on living beings, not to survive, but to get a sexual high. All Asari are women, and as we all know, women’s sexuality is a bit iffy if they’re not virgins, and Ardat-Yakshi who embrace sex are definitely not virgins. Once an Ardat-Yakshi has started feeding in this way, the lore says they’re almost incapable of stopping. Ardat-Yakshi in turn can become infected with Reaper technology and be reborn as Banshees, which completes their transformation into the grotesque.

There’s a pretty clear direct like here from moral failing to monster. Women shouldn’t have children with other women, because it ends in tragedy. The moral failings of their children – their inability to stay chaste and not have sex – is what opens them up to monsterhood, and of course the transformation from Asari to Banshee renders them grotesque. The outside finally matches the inside.

The insidious part of this is that in Western culture, if you’re fat or disabled or Other, your insides are automatically expected to match the outside. Being ugly means you are evil and not only evil, but you probably brought it on yourself.

The reason I used Banshees to illustrate this point is of course because the chain between moral failing and monster is so clear. And because I’m familiar with this specific monster.

The basics are however the same regardless of which monster you choose. Monsters must have done something to invite monsterhood into themselves. It is the idea of permeability and ascetism. If you eat in excess you get fat. If you allow food to be a part of you, come inside you, you allow evil to take hold.

We have an unhealthy attitude towards thinness and fatness in our society. We hold it up as a moral win to be thin. But thinness and fatness are not necessarily something that is chosen. Despite medical science denying that “you can just lose weight”, it is still viewed as a moral failing to be fat, which is probably why so many monsters in games are fat. It’s just a reflection of their evil.

Again, an excellent example connecting moral failings with fatness and gluttony is the Broodmother in Dragon Age. It also connects that fear of permeability with the grotesque and we already know who’s the most permeable of all. Yes! Women!. Men can not, despite the magical nature of Darkspawn, become Broodmothers. Only women. And guess what the process for becoming a broodmother is? Eating! More specifically eating tainted flesh and taint.

Women are already flawed, and once they let themselves be penetrated, that flaw blossoms and allows the monster to take over. Once the monster is in place, the woman grows, becomes fat and gives birth to other monsters.

As usual, the hero can only be a hero if there is evil to conquer, and we can recognize evil easily if we want. Just look at the fat. They had to have brought it on themselves, so how is it wrong to rid the world of them?