I’m not going to dwell too much on this, so many others have already done it so much better. I’m just going to point out that if you really wanted and planned for playable women characters in your game they would not be on the cut list. But unfortunately it seems that if the choice stands between female char and Some Other Cool Feature™ the Other Cool Feature™ will still win out, every time.

Because game devs and publishers are still stuck in the good old boys club (even though that is slowly changing).

So, this is what sparked it: 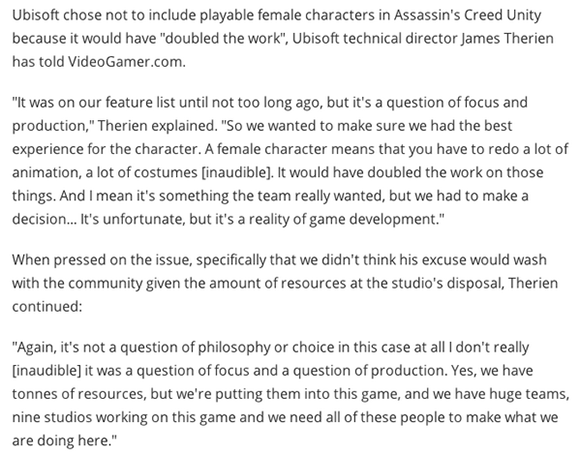 After having to deal with a game industry in uproar (YAY US! I was really impressed with the response!) Ubisoft released a “in defense of the white, stubbled dude”. Personally, I think the “defense” is pretty crappy.

We recognize the valid concern around diversity in video game narrative. Assassin’s Creed is developed by a multicultural team of various faiths and beliefs and we hope this attention to diversity is reflected in the settings of our games and our characters.

Assassin’s Creed Unity is focused on the story of the lead character, Arno. Whether playing by yourself or with the co-op Shared Experiences, you the gamer will always be playing as Arno, complete with his broad range of gear and skill sets that will make you feel unique.

You’ll note that there’s nothing about lack of resources in the reply. What there is though, is an attempt at validating the game through 1. a multicultural team of various faiths and beliefs 2. Arno is actually the most important guy. He has many features. He will make you feel unique (and manly, I presume) and 3. We’ve had women in the games before! We’ll have at least one in the upcoming game!

1. Well that’s great. It’s great that the team is multicultural. That doesn’t excuse the lack of female playable character.
2. Wow. I get to feel unique as a male, 20 – 30 years old. I also have a stubbled chin. Makes me feel fabulous. You know what’d be even more unique? A female playable character.
3. This is the lamest excuse of them all. That’s just trying to validate a crappy choice with not having done crappy choices previously. It would have been better to not have made the crappy choice this time, instead.

All in all, I’m surprised but pleased by the reactions from a bunch of sites, bloggers and journalists in their reporting of this issue. It’s good to know that the need for change is spreading. And it’s encouraging. We can make this a better culture yet.